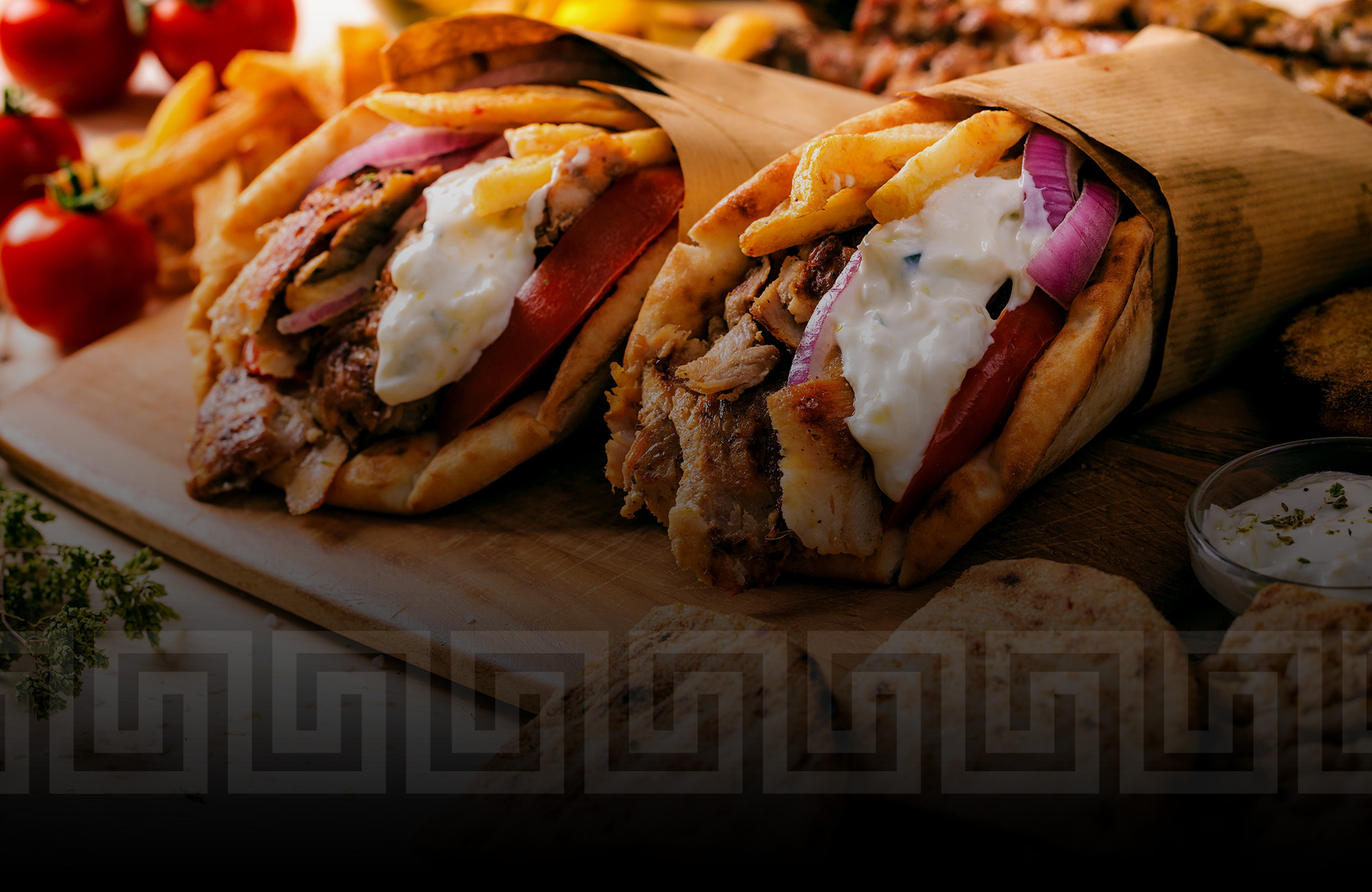 Greek food has a history almost as rich as its taste. Dating back to antiquity over four millennia ago, Greek cuisine, a historic forerunner of Western cuisine, spread its influence throughout Ancient Rome and beyond. Founded on the “Meditteranen triad” of wheat, olive oil, and wine, Greek food is known for its ubiquitous use of olive oil and array of flavorings, such as oregano, mint, garlic, onion, dill, and bay leaves. Greek food is simple, healthy, and delicious, and a favorite fare for people all around the world.

One of the most popular Greek dishes globally is souvlaki. Consisting of small pieces of meat grilled on a skewer, souvlaki is often served on a pita with fried potatoes, lemon, tomato, and sauces, just like we do it here at Tzatziki. Pork, chicken, beef, or lamb may be used. If you’re looking for the best souvlaki available this side of the Western Hemisphere, visit Tzatziki Greek restaurant in Toronto. We have consistently been voted Toronto’s top chicken souvlaki and gyro restaurant by BlogTo and Toronto.com, and offer delivery, pick-up, and dine-in at our Pape Ave. and Jane Street locations. Read on to learn the rich history of our most popular dish, and try one of our succulent chicken souvlakis for yourself by visiting or contacting us now.

If you ever take a trip to the Greek Isles, you will undoubtedly see locals eating souvlaki, whether it’s straight off the skewer at a street vendor or in a sit-down restaurant. Souvlaki is cherished for its taste, convenience, and cost-effectiveness, with many considering it not only Greece’s most popular fast food, but also the first fast food in the world.

The word souvlaki is a diminutive of the Greek souvla, meaning “spit.” Souvlaki is the common term in northern Greece, while in southern Greece and Athens the dish is commonly known as kalamaki, meaning “small reed.”

While many people think that souvlaki originated with Ottoman rule, this beloved Greek food actually dates back to the Bronze Age. Known originally as obeliskos, souvlaki was recorded as a popular street food by writers such as Xenophon, Aristotle, Athenaeus, Homer, and more. These writings reveal that ancient Greeks held festivals focused on sliced roast meat dishes, where skewered pieces of meat and other goods were sold in thermopolia — what we might today think of as food carts. This makes souvlaki one of the world’s first fast foods.

While condiments may seem like a recent addition to souvlaki dishes, they actually have accompanied the popular dish since its beginning. Athenaeus described the importance of pairing souvlaki with kandaulos, a creamy sauce based on an expensive type of cheese made from mixed donkey and mare milk. Later, this mixture was replaced by goat’s milk, and later still it was replaced by yogurt, eventually becoming tzatziki sauce — our namesake spread, consisting of fresh yogurt, garlic, cucumber, olive oil, and dill.

Modern-day souvlaki was first described by French writer Gustave Flaubert, who observed that Greeks were “grilling pieces of meat on a bamboo stick” during his visit to the Boeotian countryside in 1850. However, modern-day souvlaki was not available widely until after World War II, with the first modern souvlaki shops appearing in Greece in Livadia in 1951. Skewered souvlaki first became a popular fast food in the 1960s, after being introduced by vendors from Boeotia. In Greece today, souvlaki may be served on a skewer, in a pita sandwich, or on a dinner plate, often with fried potatoes

At Tzatziki we offer an array of different souvlaki options. In addition to our famous chicken souvlaki, we also serve succulent, seasoned pork souvlaki, marinated to perfection. Both our pork and chicken souvlaki are available on a pita or bun with French fries or as a dinner entree with rice, potatoes, and salad. We also sell our souvlaki per piece. For the ultimate backyard barbecue, you can order our pork or chicken souvlaki in bulk to grill at home, to impress your friends with our delicious Greek cuisine. No matter how you choose to eat it, our souvlaki is sure to leave you coming back for more. Contact us today to order souvlaki or another authentic Greek dish for pick-up or delivery, or visit us at one of our sit-in locations, at Pape Ave. and Jane Street. Opa!

Passion You Can Taste.